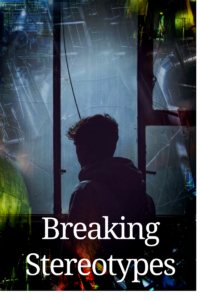 In writing Pages in the Wind, I wanted to avoid stereotypes. One of my favorite characters in the book is Emily’s friend, Perry – known as Pudge. When she first meets Pudge, she feels sorry for him. He is bullied by this classmates and seems to keep to himself. As the story progresses, she views him differently because he inspires admiration, not pity. It would have been easy to write him as a teen with low self worth, but breaking a stereotype was more rewarding and expressed my disdain for bullying.

This passage is when she first meets Perry:

As we chatted, he hung on every word, nodding in agreement over the simplest comment. I understood. I’d been in that situation too, staking my claim that I was with someone. But Pudge didn’t try to disguise himself; he clearly starred in the role of the fat kid with no friends. I guess that’s why I felt comfortable around him; I didn’t have to pretend to be someone else.

In this latter passage, Perry steps up to the podium to deliver his valedictorian speech:

As Pudge—I mean Perry, finished his speech and stepped away from the podium, the applause was deafening. People stood on their feet and clapped for the fat kid that no one wanted to be around. I jumped and cheered and even tried to whistle. All the sneers Pudge had endured for years terminated in a round of applause. He had the last word.