Ivan’s Wife is almost in the edit stage. Hardest ending ever. But, who likes simple? Not me. I’ve enjoyed the characters and the crazy parallels. In this excerpt, Dimitri finds his private room invaded. There is an interesting parallel at the end he won’t see coming.

I carefully set down my mother’s picture and listened. It had to be my imagination, like waking up in the middle of the night thinking you’d heard a suspicious noise downstairs. But, when I turned toward the door, I noticed two shadows poised like evil specters in the hallway. It was true. My sanctuary had been invaded.

And the door had no lock.

Another knock. A little heavier this time. But, still oddly rhythmic. Not a man’s knock. One knuckle. Three taps. Hardly a demand to open the door but not tentative either.

“Shit,” I whispered, feeling blood rush like storm troopers to my head. Prickly sensations crept through my body as every muscle readied for battle. Anna. No way could I allow her to get away with invading my private space. A place that, until now, was known only to me. The safe haven where I talked with my mother.

Two more chapters and Ivan’s Wife goes to editing. This book has been cathartic during an extremely difficult time in my personal life. At times I wonder how my writing might change if life rolled along easily. Maybe I’ll find out someday. Who knows.

In this chapter, the characters are in Moscow attending the debut of Ivan’s wife. Tension builds.

Music, a mix of violins, cello, and flutes, tiptoed like a soft breeze into the quiet. The children and the men working in the field faded into nondescript houses and disappeared. The beautiful woman, twisting a strand of her hair around a slender finger, pretended not to notice the dashing man who held her with his eyes as he walked toward her. You could tell his presence moved her, her chest rose and her cheeks grew red as he approached her. Her hair tumbled down like a dark veil over her beautiful face.

Should be a fun trip finishing this novel and picking the right male to play the role of Dimitri. I must say it was fun and not difficult at all writing in a male voice. hmmm…

Two more chapters and Ivan’s Wife is finished. The final two chapters are challenging but my characters will come through. In this chapter, Dimitri arrives in Moscow for his father’s long awaited opera.

It was easy to get lost in the magic of the old theatre. I could feel the creative presence of musicians taking the stage to share their art with theatre goers over the last two centuries. Whether it was war or famine, triumph or sorrow, music had the ability to touch the hearts of friends and enemies in much the same way. A myriad of emotions, nurtured through the passing of time, rippled through the theatre and quieted my racing heart. If only music could have united my father and me—if only for a time.

I have thoroughly enjoyed Dimitri. He was a pleasure to develop and I’m not ready to let him go. Thankfully, I have one more edit before the book goes to print.

Dimitri, the main character in Ivan’s Wife, is a complex man. He struggles with panic and mental illness. Trying to find the source, he thinks back to his childhood and the brother he lost.

The only one who understood was my brother, Alexander. I confided in him at twelve, told him about my spells and the delirium that followed. We’d walk along the Moskva River, near the homestead, talking for hours. I never felt judged or insane with him. He never offered me an explanation for the spells but he understood. At times, I wondered if he had them too. I hadn’t imagined how his brows would knit together and his eyes would twitch a little when he listened. But he never said anything, he’d just assure me that I wasn’t crazy and all would be revealed in time. Alexander had an inward grace, calm and reassuring.

Certain months are just harder than most. February is my dreaded month and my heroine, Katherine Hathaway, agrees. In this scene from my soon-to-be-released novel, Brooklyn Bitters, she foresees the hardest month of her life:

I sipped hot tea, stretched out on a recliner, gazing out my bedroom window. February had arrived with a whimper. The vivid colors of fall were now raked or withered, and gray clouds and misty rain cast their gloom over the city. A few Christmas trees laid decaying on the curb and the neighbor a few doors down begrudgingly leaned an old ladder against his house to remove the holiday lights. All of the tragedies in my life happened in February, twenty-eight days holding my breath and waiting for it to be over.

And here we are, in February. It can’t be a coincidence that February carries such a wallop. 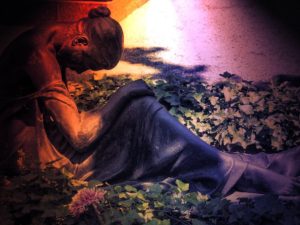