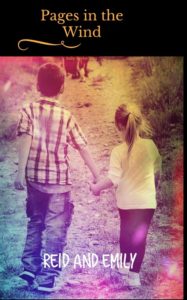 Pages in the Wind deals with some difficult topics but the story has a lot of heart and it has it’s heroes. Quite a few actually. There’s the doctor, Robert, Pudge, and her love, Reid. Emily falls in love early, and the relationship is a deep one in spite of the early start. Reid is everything that Emily isn’t: fearless, confident, cocky, and at times intense. But he loves Emily and her fears that he’ll drop her as his best friend are not true. He’s exactly what he portrays and is a wonderful character in the book. This is an early passage. Reid is a prankster and gets them both in a heap of trouble. When Emily objects, he becomes offended and accuses her of not wanting to be his friend anymore. Emily convinces him that she would never feel that way. Her inner dialogue reaches far beyond her reassuring words.

Once the prank faded, all I saw was my fearless Reid. I agreed with Mr. Hemet’s lecture about the danger of putting a live snake in his house, but his warning to stay away from Reid was wrong. Wrong for me. I didn’t feel jeopardized by Reid, I felt protected. I believed someday the fearless boy would become an adult hero. If my life were threatened, he would be the one to save me.