One of the characters in Ivan’s Wife is a mysterious young girl who comes to live with her uncle after her father’s death. Dimitri doesn’t trust her and suspects she is working against him. When she shows a rare vulnerability, he wonders if there is more to her peculiar behavior.

I admired the palms and the way the shadowy fans stood like giant tarantulas against the night sky. The patio, where Clarissa and I often dined, had a muted glow. Consuelo must have put some wood in the fireplace; my wife always did that when she had something to celebrate. No doubt she was drinking champagne with Ivan to celebrate the funding for her upcoming movie. The veranda, with its towering trees and flaming torches, was the perfect spot for the party of two.

Of course, I was avoiding my niece. I waited for her to utter some deft comment and dart off. But she didn’t. She lingered, slumped with her hair draped in front of her face like a black veil, idly kicking the dirt. She was silent, other than an occasional exhale. With her arms wrapped around herself and her head bowed, she seemed much younger than her fifteen years.

Her eyes were watery and teardrops dangled from her nose and lips like beads on a chandelier. She buried her face in her hands.

My heart fluttered aimlessly in my chest as I stepped back, gawking at the stranger in front of me. Questions dangled in my mind like a game of hangman. Was this a trick? This was not the girl I’d known for a year. Was she laughing behind the tears? Another one of Ivan’s plots? After all, she showed up minutes after my father left. This had to be an act. Ivan bobbed and weaved like a prizefighter; I, however, felt like a fool navigating with rudders in the sand. Her abrupt personality change had to be a trick. No one could change that fast. 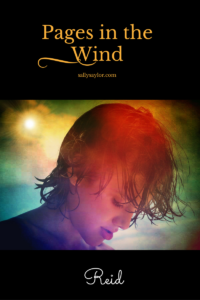 The characters of Pages in the Wind are multi dimensional, like Emily’s early love, Reid Wagner. Emily fell in love with him as a child and their relationship only grew stronger and more complex. He was bold, interesting, brave. Did he live up to her ideal?

This scene illustrates how her eight year old self viewed this unforgettable boy:

“Gee Whiz! I’ve been standing here five minutes!” He plopped down next to me with his elbows on his knees, chin in his hand, staring into space. “Let’s have some fun.”

I waited for him to come up with something, wondering for the millionth time why a ten-year-old hotshot picked me to be his best friend.

Reid redefined average. His hair was a common light brown but was stick-straight until it reached below his ears, forming curls around his neck. His eyes were dark brown, almost black. His lips were full, and his front teeth slightly crooked, in an interesting way. He walked with a slight strut showing confidence and a little conceit. He could be a block away, and I would know him by his walk.